Love one another as I have loved you 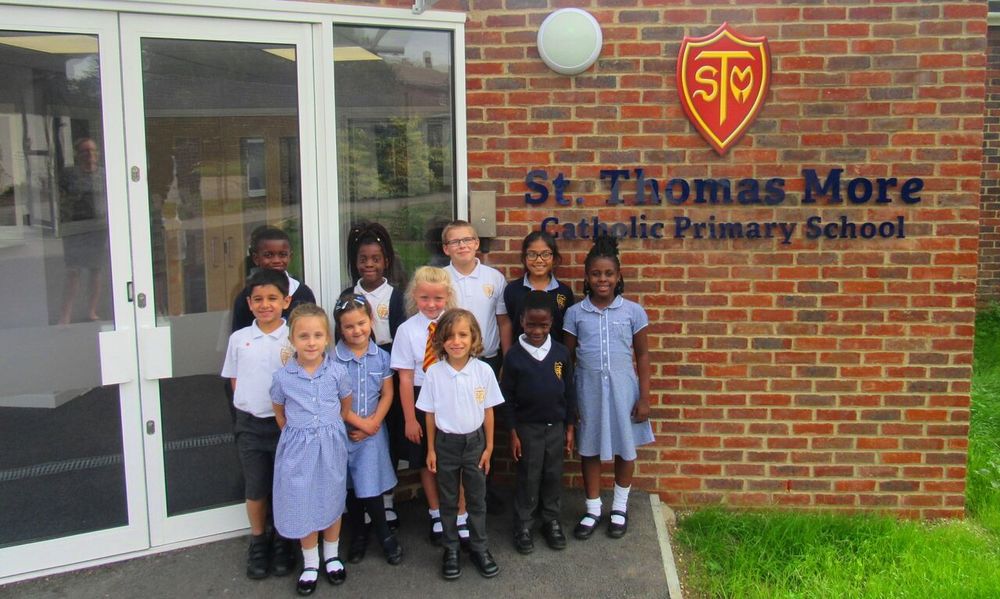 Saint Thomas More School opened in 1969 and is a voluntary aided school, built by the Trustees of the Archdiocese of Southwark . Named after a great English  martyr St Thomas More, one time the Lord Chancellor of England - a gentleman of great learning, both in Law, Art and Divinity. The school aims to help its pupils follow in St Thomas More's footsteps and become gentlemen and gentlewomen of great learning.

It all started in the early 1950’s when Dr. Glynn the owner of Bleakwood offered a room in the house as a Mass centre for parishioners of St. Michael’s Chatham who were living in Walderslade. The first Mass was attended by some twenty people including the nuns from St. Joseph’s Convent.

Over the years, the numbers increased until in the mid 1950’s when Dr. Glynn returned to Ireland, the house together with its grounds of several acres was bought by Fr. McKenna of St. Michael’s for £6000. The mass room was then extended to cater for the increased numbers and the rest of the house provided a social centre for the parish and accommodation at various time to several past parishioners. In 1965, Bleakwood house, together with sufficient land to build twelve houses, was sold to a firm of developers for £16,500 with the proviso that Bleakwood House should be leased to St. Michael’s free of charge until 1970. The St. Thomas More School and our new church now stand on the remainder of the grounds

On completion of the twelve houses, on of which, No. 5, has become the Presbytery, the developers decided not to continue with the site and offered to sell Bleakwood House back to St. Michael’s parish. After many negotiations a price of £7,500 was agreed upon. Meanwhile, however, the parish of St. Simon Stock, Walderslade had begun its existence as a separate entity on the 12th January 1967 and the sale was completed by St. Simons in February 1967. Apart from the addition of a new altar, a new organ and cassocks for the servers which were small but very significant improvements the main focus of attention was for the building of a new school which was long overdue in a rapidly expanding community.

Early in 1970 plans were prepared for a new Church and the life of Bleakwood House was nearing the end. The house has now been sold for £12,000 and is due to be demolished to make way for more houses. For these who lived in Walderslade all their lives and especially Dr. Glynn who once owned this characteristic old house, it will be a sad day when this familiar outline is removed from Walderslade Road. And for or those of us who will witness the opening of our new church next Sunday, Bleakwood House will be fondly remembered as the centre for many years of the Catholic activities in Walderslade.

Account written by Paul Chapman Chairman to the Parish Council

Sketch created By Mrs Tanner, who also was the creator of the school logo

The provision of a Catholic school to serve the expanding community of Walderslade was a project clouded with a great degree of uncertainty in the early stages. Notice to establish a school was publicly given on the 1st March 1965 under the names of Thomas Hill, Thomas C Carter, John H Twomey and E Mahony. The Kent Education Committee rejected the application on the grounds that the site was unsatisfactory and impractical for building purposes. The Diocesan Schools Commission was informed accordingly and its Chairman advised that all the land belonging to Bleakwood should be sold if a buyer could be found. Happily this advice went unheeded.

In 1967, the shortage of school places became acute and the original plans prepared by Derek Bulkler and Partners were re-submitted to the K.C.C. On this occasion the application was successful and stage one comprising of six classrooms, a hall, an administration block and kitchen giving accommodation for 240 children was started in April 1968 and completed in September 1969. The total cost of £85,872 was distributed between the Department of Education and Science (80%), St Michael’s Parish, Chatham (13.3%) and St Simons Stock’s Parish (6.7%). It was decided to name the school after St. Thomas More, co-martyr of St. John Fisher in deference to the fact that there was already a St. Simon school in Maidstone.

The School was opened on 10th September 1969 with an intake of 147 children, which allowed Sister Callista, the Headmistress a theoretical quota of 4 ½ teaching staff! The governing body consists of Fr. Reynolds, Mr Fuchter, Mr Ling, Mr Twomey, Mrs Clark and Mr White. In September 1970 the number of children increased to 210 with a staff of 6 teachers including Mr Brannigan the deputy head. This month the school opens its doors for the autumn term to 232 children and a staff of 7 teachers.

Parents have shown a great interest in the school and every function has been well attended. Visitors to the school are immediately conscious of the happy atmosphere that pervades the building and of the dedication with which the children are taught. It is indeed a tribute to the work of Sister Callista and her staff that the St. Thomas More School in its short life of two years has already achieved an enviable reputation within the community of Walderslade.

The school celebrated it's 40th anniversary in September 2009 by having a school reunion for past staff and pupils and an open air mass on the school field, followed by a 60s fancy dress fun day for the children where the circus came to visit.

In 1970, the firm of Francis Weal and Associates were approached to draw up plans for a church complex at Walderslade. The specification called for a building of conventional style designed to cater for the religious and social needs of the parish. The plans were accepted and several companies were invited to tender for the work of building the Church. The lowest quotation of £20,829 submitted by the firm of Flaherty Bros. On the financial side, the Manager of the Midland Bank kindly agreed to loan the money needed for the work at the very favourable rate of 1% above bank rate at a time of severe restrictions on credit. The building was completed on schedule on 2nd August 1971.

The new Church is a multi-purpose building with large sliding doors situated just behind the sacristy door which can be easily drawn across to completely separate the Church from the hall. The mahogany alter is of a modern form and mounted on a marble dias which is effectively illuminated from large side windows. The hall and Church combined can seat up to 240 people and is well equipped with kitchens, cloakrooms and storage facilities. Whilst economics have been a dominant factor care has been taken to ensure that all the materials used would last with the minimum of maintenance.

On this great occasion, let us spare a thought and a prayer for those who have given freely and generously of their time and energy in making this new Church possible. The priests who have administered to the needs of the Catholics in Walderslade namely Fr. Sheely, Fr. Gualzatte, Fr Fitzsimons and our present priest Fr. Reynolds under whose ministry the school and the new Church have come into being. Also at this time we should especially remember those who did not live to see the results of their work. In particular, the earlier parishioners will remember the late Mrs Dee who lived in Churchill Avenue. A former St. Michael’s parishioner, she sold raffle tickets at the church door for a week after week, collected jumble and visited people who were sick and willingly doing any job that was required. All this whilst caring for an invalided husband at home! Amongst others we should also recall the work of the late Terry Bryant, Mrs Robertson and Mrs Cuddon.

The Ladies’ Guild was founded in the mid 1950’s by Mrs Peggy Skinner. It started with about ten members who met once a month and one or two of the original ladies are still active members.

The aim of the Guild was to organise jumble sales, bazaars, church social events and to help the priest wherever possible in the parish. Walderslade at that time was not an independent parish but part of St. Michael’s of Chatham, - Bleakwood House only being a Mass centre. They made the first altar fronts, organised a cleaning rota and generally saw to the upkeep of Bleakwood. During the early 1960’s as the parish grew with the new housing developments in the area, more people joined the Guild and meetings were then held on the first Thursday afternoon and the third Thursday evening of each month. The creation of a self-supporting parish in 1967 meant more work for the Guild which was tackled with vigour and enthusiasm.

Amongst the events usually organised each year are a Blossom Tour in the spring and an outing to London in the autumn. Next year it is hoped to arrange a weekend tour of the Dutch bulb fields. The Guild takes part in the Woman’s World Day of Prayer and in pilgrimages to Aylesford on special feast days. Recently they have joined the Catholic Woman’s League.

With a community now made up mainly of young families, the members of the Guild try not to neglect the older parishioners. With their enthusiasm and spirit, they have been instrumental in making our Parish and especially the Ladies’ Guild what it has become today.